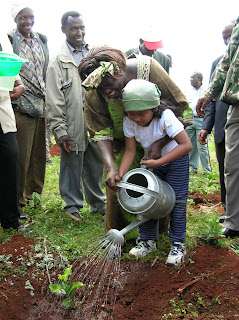 The dramatic story of Kenyan Nobel Peace Prize Laureate Wangari Maathai whose simple act of planting trees grew into a nationwide movement to safeguard the environment, protect human rights, and defend democracy—a movement for which this charismatic woman became an iconic inspiration.

When: 7:00 pm, Friday, May 22
Where: Conserver House, 180 St. John St., Fredericton
TAKING ROOT weaves a compelling and dramatic narrative of one woman's personal journey in the context of the turbulent political and environmental history of her country. Raised in the rural highlands of Kenya, educated in the United States during the 1960s civil rights era, and the first female to receive a PhD in East Africa, Wangari Maathai discovered the heart of her life's work by reconnecting with the rural women with whom she had grown up. They told her that their daily lives had become intolerable: they were walking longer distances for firewood, clean water had become scarce, the soil was disappearing from their fields, and their children were suffering from malnutrition. Maathai thought to herself, "Well, why not plant trees?" Trees provide shade, prevent soil erosion, supply firewood and building materials, and produce nutritious fruit to combat malnutrition. With this realization Maathai founded the Green Belt Movement, a grassroots organization encouraging rural women to plant trees.

Co-hosted by the Conservation Council of New Brunswick and Cinema Politica Fredericton.