Fredericton - The New Brunswick Media Co-op is launching a province-wide independent, news website (nbmediacoop.org) and monthly print publication, The Brief, on Monday, August 3rd. The launch will include an information and activity table at the Family Fun Day in Wilmot Park from 1-4pm, and evening party at Dolan's Pub starting at 8pm. The Brief--a 2-page broadsheet--will be distributed free of charge across New Brunswick.

"We aim to give voice to alternative views while covering communities and events that are ignored by the virtual media monopoly held by the Irvings," said Alex Murphy, member and writer for the NB Media Co-op.

"More now than ever, we need media to be a tool of accountability and democracy. This is impossible when the province's media is almost entirely controlled by one company, which has its own corporate interests at heart, rather than those of the public. We wish to fill that void by making independent media widely accessible to all New Brunswickers," added Murphy.

The NB Media Co-op is seeking members, contributors, and journalists from across the province, and will accept submissions in both French and English.

"We believe that operating democratically in a member-funded, co-operative model will provide greater accountability to the public. We are seeking out people to serve on an advisory committee, with representatives from diverse and under-represented communities. This will ensure that the issues that matter to all New Brunswickers are covered," explained Marie-Christine Allard, a member of the Co-op.

When the corporate domination of the province's media led to the closure of the Carleton Free Press, it became apparent that citizens would have to band together to provide a true voice for the people of New Brunswick. The NB Media Co-op was officially formed at a day-long conference in May that included journalists and concerned citizens from across the province.

"New Brunswick Day is an appropriate day for the launch, since the virtual media monopoly is one of the most pressing issues in the province today," added Allard. "In light of the recent announcement that a dozen professors are now refusing to provide political commentary for the province's main newspaper, in protest of the dismissal of journalism intern, Matt McCann, the NB Media Co-op will provide a welcome and accountable alternative to the uncritical for-profit media."

CALL OUT for N.B. Media Co-op Advisory Board Representatives

About the N.B. Media Co-op:

The New Brunswick Media Co-op proposes a grassroots, democratic, reader-funded alternative to the corporate press. We're looking for readers, contributors, members, volunteers and sustainers. The Media Co-op belongs to all members and contributors. All forms of media (print, radio, video) are welcome for inclusion on our website and our monthly publication, The Brief (both soon to be launched). Our approach combines journalism, community organizing, and online collaboration to create a financially sustainable, independent, member-run Media Co-op network that spans the country.

Advisory Board members will:
Representative Positions Open:
To apply: Submit 1-2 paragraphs about yourself stating your interest in the position and your experience with the group/issue you would like to represent. Submission of interest must be sent by August 3 to admin@nbmediacoop.org
Posted by Michelle 0 Comments

DIVERSITY AND COOPERATIVES IN ATLANTIC CANADA

Among responding cooperatives (296 co-operatives & credit unions in Atlantic Canada), 95% had no First Nations people on the board; 87%, no person with a disability; 86%, no member of visible minority; 75%, no youth; 14%, no women. In Atlantic Canada, a co-operative has typically 3 women on its board, clearly less than 50%. The co-operative movement might want to initiate a discussion on its policies and practices regarding recruitment of board members. 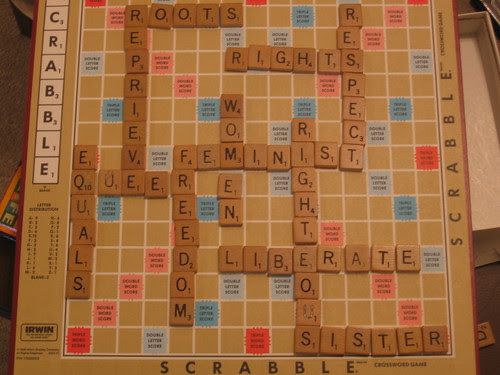 This weeks feminist photo is brought to you by flicker user natashalcd.
While I feel like the sacred rules of Scrabble were bent (if not broken!) to complete this work of art, I still completely endorse its excellence and give it two feminist thumbs up!
Posted by Keri 0 Comments 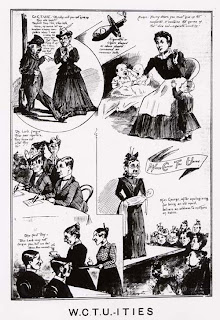 This initiative is spearheaded by a "Progressive Conservative insider" and claims it is going to be "a broad-based, multi-partisan organization".

I find that exceptionally hard to believe since even this article is highly biased toward the implementation of a Tory report suggesting the parties need to be offered more money to run female candidates and that proportional representation would increase the number of women in government. Insinuating they would have implemented these changes had they not lost the last election. HA!

Are they really suggesting that women aren't in politics because the parties aren't letting them in? How about the fact that the traditional, capitalist, political structure that we adhere to is also *gasp* patriarchal? When this initiative fails they will say "women aren't interested in politics", and when it has marginal success every time a female politician screws up they will say "so much for affirmative action".

I'd also like to send a special thank-you out to the good old boys who comment on CBC. Seriously, when are we getting that middle finger option I've been requesting? Sometimes a thumbs down just isn't enough.
Posted by Michelle 0 Comments

Ohio Law Would Give Men Final Decision in Abortion

A Republican lawmaker in Ohio has re-introduced a bill that would give a man the final choice on whether the woman he got pregnant could have an abortion.

Dubbed the “father’s right bill,” it would give the man the right to stand up and say he doesn’t want the fetus he contributed DNA to to be aborted. But it says nothing about then forcing him to be a good father or provide financial stability.

Its sponsor, Rep. John Adams (who has reintroduced a bill first put forth in 2007), has stated publicly that this is an attempt to “keep the two people who have created that child together.”

This is why feminists can't retire.

How badass is Jane Fonda's mug shot?
So badass that she made a t-shirt out of it and wares it around (I love it and I want one)!

While not unproblematic, Jane Fonda is a huge activist and feminist. Check out her wiki to learn more.

Awhile ago she was on the Colbert Report with Gloria Steinem, at which point they all baked a pie (link).

You can read her blog here!

Today's post was inspired by the facebook quiz Which Historical Female Badass Are You? (link)
Posted by Keri 0 Comments

NB RebELLES in the Times and Transcript

Greetings Friends! Check out the great article in the Moncton Times and Transcript that features our group!

In celebration of the many women's groups
Published Thursday July 9th, 2009
Thanks again to the New Brunswick Advisory Council on the Status of Women (link).
Posted by Keri 0 Comments

July 10, 2009
FOR IMMEDIATE RELEASE
MEDIA ADVISORY
IT'S TIME TO CELEBRATE WOMEN!
Fredericton: The NBRebELLEs - Fredericton are hosting a Women's Work Festival as a celebration of Women and their contributions to their communities in Officer's Square, Fredericton, Saturday, August 22nd. The festival is intended to be a full day of music, performances, information booths, food and workshops hosted by women for everyone to enjoy.

"We're trying to create a safe and open space for women to showcase their work and community contributions," says Jessi Jones, an active member of the NBRebELLEs - Fredericton and an organizer of the Women's Festival, "the festival is free of charge to both contributors and attendees and we hope everyone feels welcome to attend."

The NBRebELLEs just celebrated their first year anniversary as a Fredericton Feminist organization and have themselves participated and organized a number of fundraising and awareness-raising activities. Their adoption of the Feminist Manifesto after the 2008 Pan-Canadian Young Feminist Conference in Montreal drives them to continue contributing in their own community.

"Networking is vital to collective struggles and providing spaces for women to share the things they are passionate about is an important part of building a strong community," says another NBRebELLE, Keri Ryan, "We still have lots of room for more artists, vendors, musicians and anyone else at the Festival, so please feel free to contact us if you'd like to contribute."

If you are a self-identified woman, and would like to sell your wares, provide an information booth, give an instructional workshop, or play/perform on the stage, contact the NBRebELLEs at Womens.Work.Festival@gmail.com and check out their webpage
Posted by Michelle 0 Comments

The Feminist Karate Union (link) began as a self-defense class for women in Seattle, WA. It has since developed into an active, independent, non-profit karate school for women and children, taught by women. 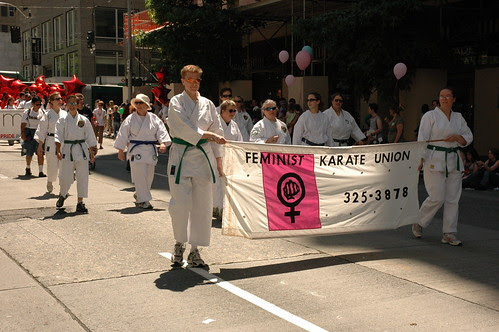 They offer a news letter and merchandise on their site - do check it out!

As their resource page is limited to martial arts in the US, I'm wondering if anyone knows of anything like this in the Canadian context.
Leave a comment and let us know!
Posted by Keri 0 Comments 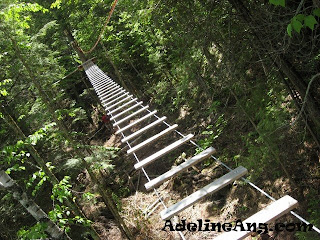 Various Feminists and Feminist Groups in the Fredericton area are getting together for Tree GO (link).

Please RSVP to nbrebelles@gmail.com if you're planning to attend or want more information. The RSVP cut-off date is Friday July 24th.

In your response, let us know your preferred contact info and if you need (or can provide) a drive.

In Solidarity,
The NB RebELLES - Fredericton
Posted by Keri 0 Comments

Click here to check out this artist!
Hi friends and supporters,

Please feel free to distribute this call-out among your networks. The NB Rebelles Fredericton gumbooters are putting our boots back on, and we're looking for new members! If you have a desire to express your feminism through slapping, clapping and stomping, this is your opportunity!

No experience is needed, and there are no age, gender, or any other restrictions. All that is needed is a sense of humour and a willingness to learn.

Below is the link to our Facebook group and website, as well as some videos with examples of moves we have learned. If you need more information or you are interested in joining, please email us at nbrebelles@gmail.com, with "Gumboot" in the subject line.

Our practices are on Mondays at 7:00pm, starting July 13th. Join us! 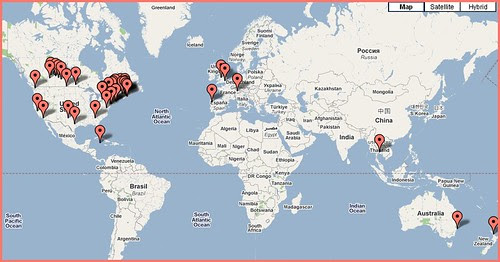 Say hello in the comments if you're interested! How is feminism doing in your area?
Posted by Keri 0 Comments 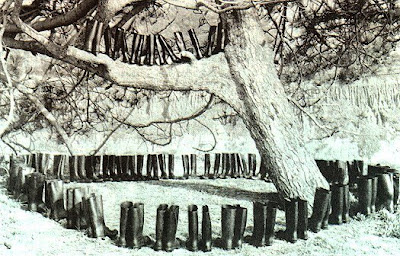 Eleanor Antin is an intriguing conceptual/installation/performance artist and film-maker from the States.

'100 Boots' is the name of a stunning conceptual series that she created by photographing black rubber boots in various locations from coast to coast across the US from 1971 to 1973 - there are 51 photos in all. This one is my favourite (also - a total shout out to our gumboot troupe!)

In 1972 she also created Carving: A Traditional Sculpture (link). It was "a pseudo-scientific record of her weight loss on a strict 36-day diet. She had herself photographed naked every morning -- front, back, left, right -- as she ''carved'' her ''ideal'' self through abnegation" (link).
If that's not feminist commentary on our culture, I don't know what is.
____

If you see a photo that you'd like to see posted/written about, email nbrebelles@gmail.com with "Weekly Feminist Photo" in the subject line.
Posted by Keri 0 Comments 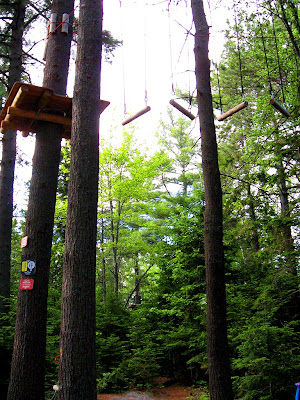 Various Feminists and Feminist Groups in the Fredericton area are getting together for Tree GO (link).

Are you interested? Help choose the date!
Fill out this doodle poll: link

If more than 15 people sign up, we get discounted price.

After you fill out the poll, email nbrebelles@gmail.com with your contact info, and we will keep you up to date with the plans!
Posted by Keri 0 Comments