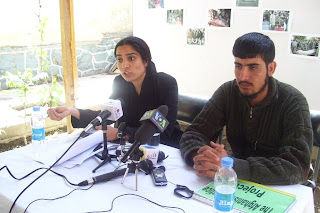 This now infamous law is but the tip of the iceberg of the women’s rights catastrophe in our occupied country. The whole system, and especially the judiciary, is infected with the virus of fundamentalism and so, in Afghanistan, men who commit crimes against women do so with impunity. Rates of abduction, gang rape, and domestic violence are as high as ever, and so is the number of women’s self-immolations and other forms of suicide. Tragically, women would rather set themselves on fire than endure the hell of life in our ‘liberated’ country."

Use these links to read her entire declaration in English, or French.
Posted by New Brunswick Rebelles - Fredericton